Enter the Lucrative Beef Industry and Become a Meat Millionaire!

In CA$H COW you become an industrious beef producer on your way to becoming the biggest in the region. Buy cattle and do your best to make them grow in size and value! You must buy food, water, and other amenities to raise the efficiency of your ranch, and accelerate the growth of your cattle. Use every tool at your disposal to market your meat! Increase demand with a sponsored BBQ! Attract big-league buyers like the State Fair, entice patrons with your prize winning steers, and even make an appearance on your local TV news station! All in the effort to sell your steaks!

Buy Cattle from the Market,
care for the majestic creatures as best you can...
Sell for maximum profit.

Urban Start-Up: Tired of big-meat's lack of transparency, you move outside the city to start your own grass-fed cattle ranch!

Family Owned Farm: You grew up on this modest ranch, and your family has kept the business running strong for generations. Now it's your turn to take the helm!

Beef Enterpriser: You're no fool, anyone with eyes can see that Americans have an insatiable appetite for livestock. Beef being in the highest demand, you decide to get in on this $44 Billion industry by buying up a well established farm. You're looking to expand and conquer.

With a legally used soundtrack by AJJ!
"People" from People Who Can Eat People Are the Luckiest People in the World (2007)

Buy Trucks, you'll need them to ship your livestock from the Feedlot!

Hire Managers to help you run your farm.

Rancher - Will care for cows and makes a ranch run smoothly!
Auctioneer - Automatically buys and sells Feeder Cattle in groups of 5x.

-Updated the title screen, added new system to change rooms with added delay
-All UI for the Market (in the Ranch!) is finished
-Moved Sell Heifer and Seed Cattle UI to correct places.
-New Layout to encourage industrious mindset
-The Ranch Worker will help cattle grow much faster when near active upgrades
-Added Responsibilities menu to the Ranch worker
-You can enable and disable raising of young seed cattle
-You can enable and disable heifer insemination
-New Auctioneer sound... changed due to lack of rights for previously used sample

I started this game after being hooked on AdVenture Capitalist for weeks, and having to research and deliver two speeches on how cattle become beef. So, I had learned all about the beef industry from several sources, all with their own unique perspectives on the practices and overall merit of the meat industry. My favorite source by far was Temple Grandin, as she was appealing to the industry to instill higher standards for animal living conditions, treatment, and slaughter. She was't talking to us about the beef, she was talking to the ranchers. I loved it. But that's not exactly what this game is about.

This game is a depiction of what I think the most apologetic in the industry see. This is how the YouTube videos from ranches in Iowa want you to believe the process is. Sure, they don't exactly lie to you, but they don't give you a complete picture by any sense. This also reflects what I've seen from even educational programs meant to take away the mysticism of meat, but it ends up painting a much brighter, happier picture than reality. Game Maker let my creativity flow. As ideas came and went, I was able to test anything I wanted as long as I took the time to figure out how to do it. What started as an exercise in mechanics, became a platform for my emotional and social ideas.

I didn't know it was on Itch.io :O

Awesome game until I got to the Feedlot and it crashed. I bought everything and now can't close the upgrade menu.

I've updated the game. And while I can't promise this release is bug-free, I can say that the bug you encountered is gone! 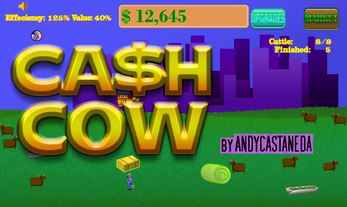 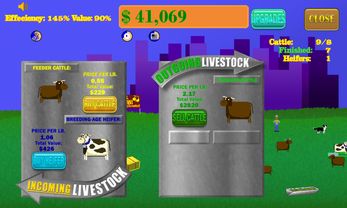 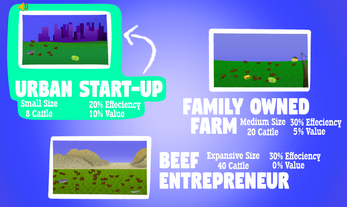 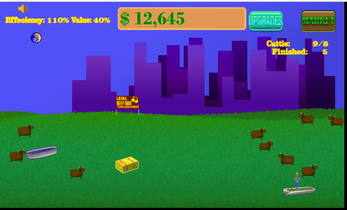 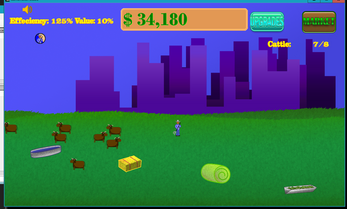